Retro fifties box camera Coronet Twelve-20. This is the standard model in brown. The camera covering is faded and a little bubbly. The shutter works. A lot of rust.

This is a vintage item. Most of the analogue photo equipment that we offer on our website is still in working condition; however our retro cameras and accessories are mainly meant as a decorative item/collectible.

Because of the age of this object, we do not provide any type of warranty on the technical and/or optical aspects.Read more about warranty on our FAQ page.

Retro fifties box camera Coronet Twelve-20. This is the standard model in brown. The camera covering is faded and a little bubbly. The shutter works. A lot of rust.

Coronet was a British camera producer from Birmingham, founded in 1926 by F. W. Pettifer. This brand has produced several types of cheap box cameras and folding cameras until 1967. To avoid having to pay import taxes in France, it worked together with the French Tiranty, that's why some of the models wear inscriptions in French. 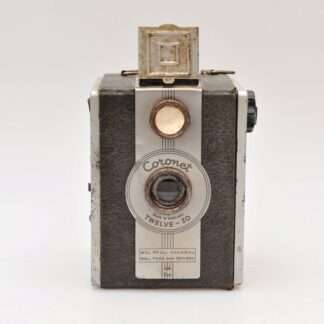